Third Quarter Check-Up: Is the US Consumer Still Healthy?

It may seem like a simple question with a simple answer, but there’s a lot more to it than you might think. Financial trade publications and cable television networks often discuss the importance of “GDP” or Gross Domestic Product, a measure of a country’s (or group of countries’) economic output. In the United States, the consumer accounts for approximately 70% of national GDP, which is why the health—or sickness—of the US consumer is so vital to our economy. In fact, the US consumer is also an integral part of the global economy, as the US consumer accounts for 17% of global GDP, surpassing the world’s second largest economy (China), according to some estimates (source: US Bureau of Economic Analysis, World Bank).

Understanding the behavior of the U.S. consumer is a function of knowing the consumer will continue to spend as long as: 1) they have a job, 2) they think they will keep their job, 3) they can count on stable or rising wages, 4) asset prices for stocks, bonds, and real estate continue to rise, 5) they can pay their bills and monthly expenses on time, and 6) they have access to (more) credit should they need it.

Therefore, when assessing the health of the consumer, I like to break it out into these six different categories and make a report card: 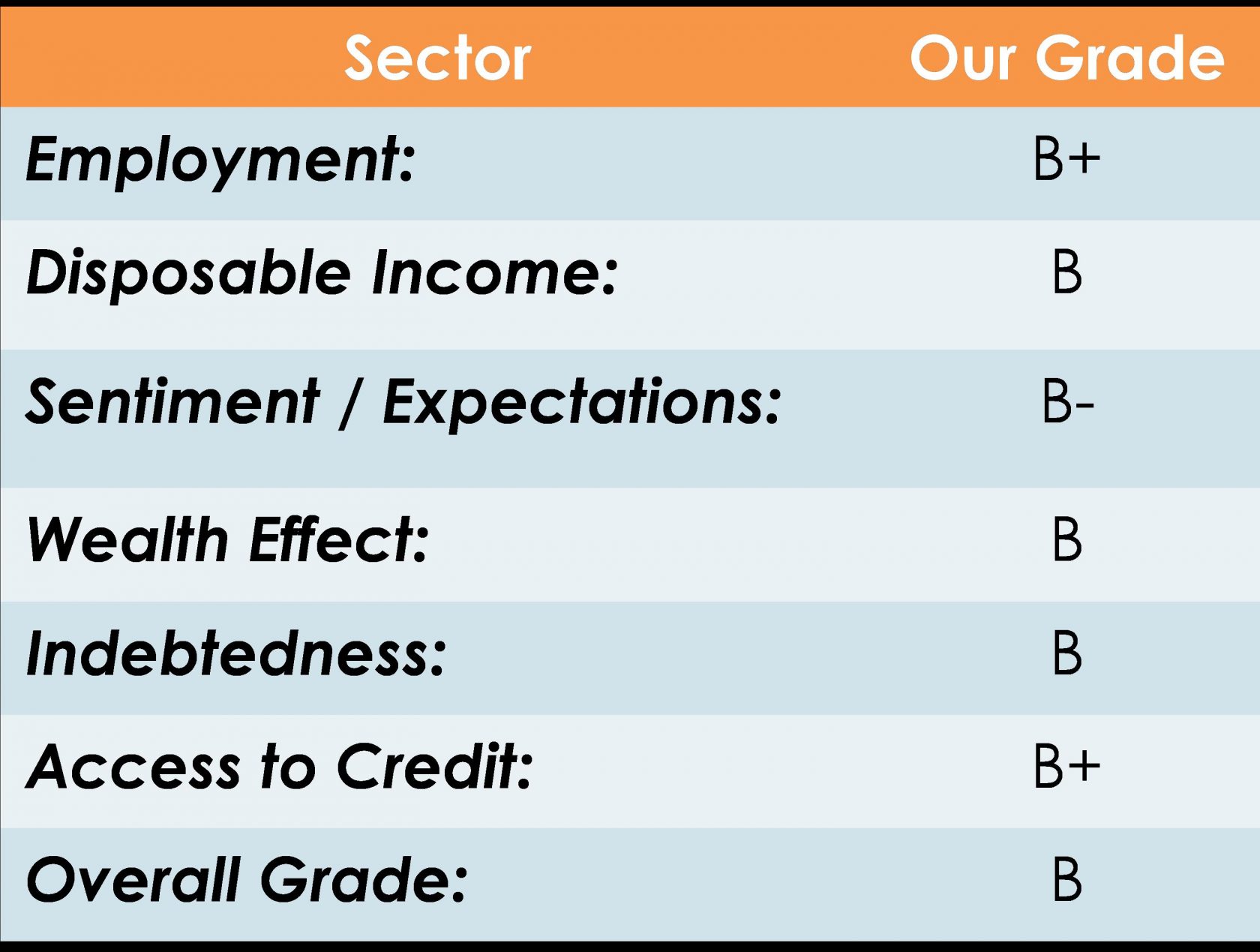 After considering all of the above, we come to a picture of a consumer who is employed with money to spend. Though they might think twice about adding another streaming service to their TV bundle, or opt for takeout on Friday evening instead of a weekend on the town, the average consumer is still willing and able to spend. The uncertainty in the markets seems to be one of most pressing items on the minds of the consumer—take a look for example at the increase in the personal savings rate, according to the Wall Street Journal; the average rate is higher now at 8.2% than for any full year since 2012. Overall, we are arguably in the best position possible given that we are in the 11th year of an expansion, and relative to consumers across the globe, the US consumer is generally in much better shape. We will be watching all of the above closely as we decide the most prudent ways to allocate to our models.

Our final grade for the US consumer is a “B”, but the best days are almost certainly behind us; this grade was an “A” just a few quarters ago. With the “peak consumer” behind us, it is important to put this simple report card into perspective.

A straight “A” consumer typically spends at or above the long run rate of wage and income gains, call that 3%, which contributes something like 2% to total GDP.

A “B” grade consumer spends more like 2%, contributing 1.25% or so to total GDP—still not bad.

But should the health of the US consumer deteriorate further from here and become a “C” rated spender, this implies more of a maintenance-level spending rate of 1%, contributing only 0.5% to 0.75% to GDP.

With less than 1% GDP from consumption, the risk is the economic expansion approaches stall speed, becoming much more vulnerable to further negative developments. In turn, negative overall GDP is not far away when the consumer spends at below a 1% growth rate, especially when concurrent with a rapidly slowing manufacturing sector—which we are seeing right now. We are not at this time calling for a recession, but if the consumer continues to slow, the second half of 2020 could threaten the end of this expansion.